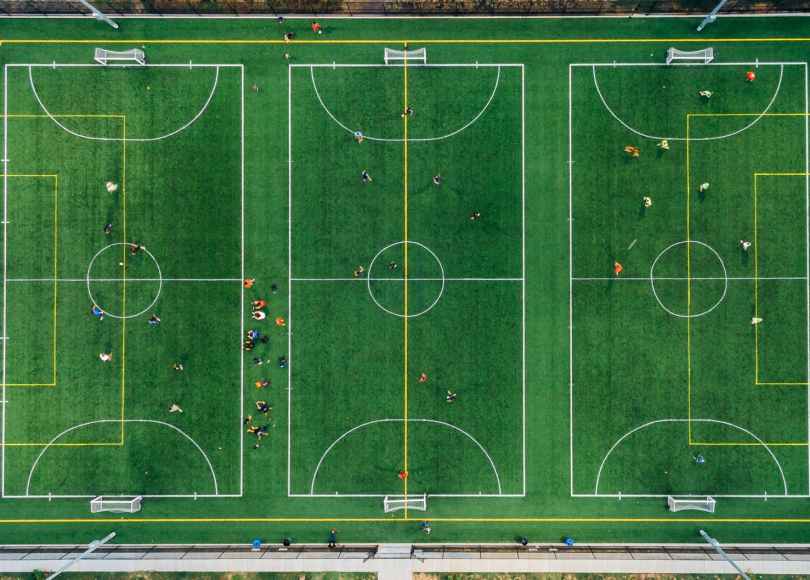 Patterns of play are essential to the game. They can begin with any player on the pitch, and range from extremely simple to frighteningly complex! But the more players practice them and understand their effectiveness, the better the rewards for your team.

We train patterns of play to help players identify and execute pre-determined passing and moving combinations to beat the opponent’s defense.

Sometimes that may mean penetration to score a goal, other times it may also mean playing through the opponents forwards or midfield to get through their defensive block or pressure. Executing patterns do not always deliver the desired results; however, depending on the targeted outcome, secondary success can be achieved.

Consider that creating a goal-scoring opportunity was the aim, having been stopped short in the execution of the pattern of play your team could have won a corner, penalty or free-kick in a dangerous area. Nevertheless, even retaining possession through good passing and movement can serve to disorganize the opponent’s defense, whereby your team can redistribute possession to another area of the field to have a better chance to penetrate.

If you are a coach, also consider individual and team confidence. When the attacking team is only playing in reaction to one another, this means they are trying to discover moments and gaps out of pure randomness to get success. At the same time, the opponent can anticipate and defend.

The likely outcome is a lot of technical and tactical errors that subsequently result in higher turnovers, which weighs a players confidence. On the other hand, when you have a team that knows the system and they can execute plays on minimal touches, and at such a high speed the opponent cannot always react to this, which in turn, offers a higher chance of success.

Central Patterns of play in the 4-4-2 formation

The primary difference between central and wide penetration is that central patterns in the opponents half generally result in players arriving in good goal-scoring positions.

As for wide patterns that come to fruition, they typically result in wide crossing positions or dribbling opportunities into the box from a wide position. That is unless the pattern includes the final ball into the box. Note, all patterns of play can be mirrored to both sides of the field.

The biggest challenge is getting players to identify all at once the trained pattern of play at the same time in a 90-minute match.

However, with the right conditions of open play in training, we can develop each players capacity to read the game and identify those moments. I have found this methodology of field mapping in a conditioned game to be an effective learning method by training the players’ ability to identify moments to use patterns of play in a competitive match.

What-If’s: *This is usually where a coach has to show his value as a mentor, as there will be plenty opportunity for stoppages in the conditioned game, helping the players discover their what-ifs will be crucial for developing a confident possession-based team. Remember it is essential for players to identify not only their patterns of play but also know their what-ifs if the desired outcome cannot be reached.

Mapping the field: Not only for training patterns of play, there will also come secondary success from this methodology of mapping the field. Players improve their tactical awareness, and by understanding certain positions to certain zones at certain times, it serves to help them in their decision making and subsequently their confidence.

Mindset, repetition and patience: Try not to hurry success too early, the more you handover performance ownership to the player and create the correct mindset within the group the sooner you will see the rewards of this training. Facilitating a mindset of discovery and problem solving over error avoidance and forcing opportunities will significantly improve the players learning as well to help create the desired outcome.